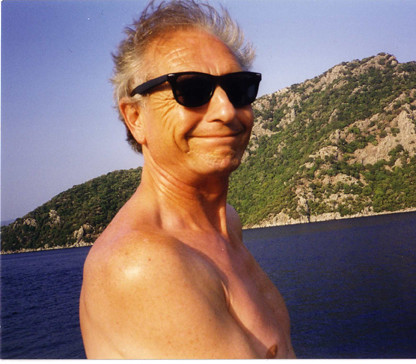 For anyone that didn't know my Dad all I can say its that you missed out on a truly individual person. When I think about him, nothing but a wave of smiles come to my head. I know I will miss him. He was possibly the most wonderful man I have ever met, okay I'm slightly biased but I know a few people that would agree with me.

He was always kind and considerate. He fathered two boys and even though my brother and I are two very different people you can see how much he has influenced our lives. We have learnt kindness, generosity, faithfulness and even honesty from him. I know that both my brother and myself will love him eternally.

For those of you who have actually met my father you will know what I'm talking about. You will be pleased to hear that he died peacefully and in no pain. On the 26th May 2005 my Dad was diagnosed with Cancer of both the Pancreas and Liver. From that moment on he slipped very quickly away from us. At the beginning of June the Doctors pronounced officially that his cancer was terminal. It's not something I wanted to hear but it's something I feared they would say.

On the 2nd June my Dad's health deteriorated further, there was nothing more we could do for him, apart from hope that his pain was minimal from here until the end. On Friday the 3rd June they moved him down to a hospice. This was far better than him sitting in a ward to himself with all the nurses and doctors around him having no time to spend caring for him. Once in the hospice things inside my heart were much calmer. He got a lot better care and when he was awake there was at least a garden to look out onto, much nicer than 4 white walls of a ward

Derek Lock died around 8pm on Thursday 6th June, aged 64. Its no use expecting it because it was still a shock to us all. I couldn't figure out if I was sad or happy for him. I couldn't seam to cry because I felt a kind of joy for him that he no longer needed to suffer. There's nothing more heartbreaking than seeing someone you love so dearly go through so much pain.

He was a good man. The best. I speak for everyone that I know can't seam to say it for themselves. Rest in peace Dad, I miss you, I love you and I always will.